I came into this game not expecting a lot , after catching the game on Saturday. As usual breaks don’t really suit us and our poor showing in the transfer market didn’t exactly inspire confidence either. And then we had CatGate. I’m not going there. It’s been done to death everywhere and the club need to make a stand and ensure the correct disciplinary procedures are undertaken.

I was surprised how busy it was outside the ground so skipped in early, and caught the now customary light show. Despite the empty seats shown in the photo, it was pretty much a full house come kick off.

The game itself was very reminiscent of the Palace games last year (no surprises with Mr Hodgson taking up the reins at Watford recently) . Watford were compact and disciplined , and broke well. We were stifled somewhat, but just needed to break a line or 2 to get the upper hand.

Watford fans were enjoying themselves booing Zouma at every opportunity, and at one point chanting RSPCA ! He actually played well, but maybe against a home crowd this weekend coming at Leicester it may be more of an issue. Easy to ignore when you are miles from the support.

We were very poor. Rice was out of sorts, and everyone else seemed between 5 and 6 /10. Watford were on top , no doubt, but didn’t have that clinical last touch, or bit of magic.

Benrahma had one chance saved when Bowen made a great run and pass to leave him in the box unattended. And that’s that.

0-0 half time and my pre-match prediction of that very score was coming to fruition.

Second half was better for West Ham, but Watford were no way out of it. Both teams had chances but they were mainly of the lash it goalward variety.

About the hour mark, the game took a subtle change and West ham were getting that ball into the box to a player more often, . We kept prodding and were getting better chances but still nothing clear cut. Rice was head and shoulders above his first half performance. Lanzini and Fornals were very busy, and Antonio was still a little lost.

And then the stars aligned with Jarrod Bowen receiving the ball from the sub Lanzini, and getting a lucky deflection to break the deadlock.

And then it went back to stalemate again for the remaining 20 minutes.

So not the most exciting game and we rode our luck, but that’s 2 games on the spin where we have ground out a result despite being the worse team. Are we lucky, or are we trying harder ?

MOTM Dawson. Big Daws does it again, got his head in where it was needed (probably with some extra motivation, bearing in mind the opposition), and at one point in the first half went on a unheralded mazy run past 2 opposition players to hold possession, when Zouma was down injured. 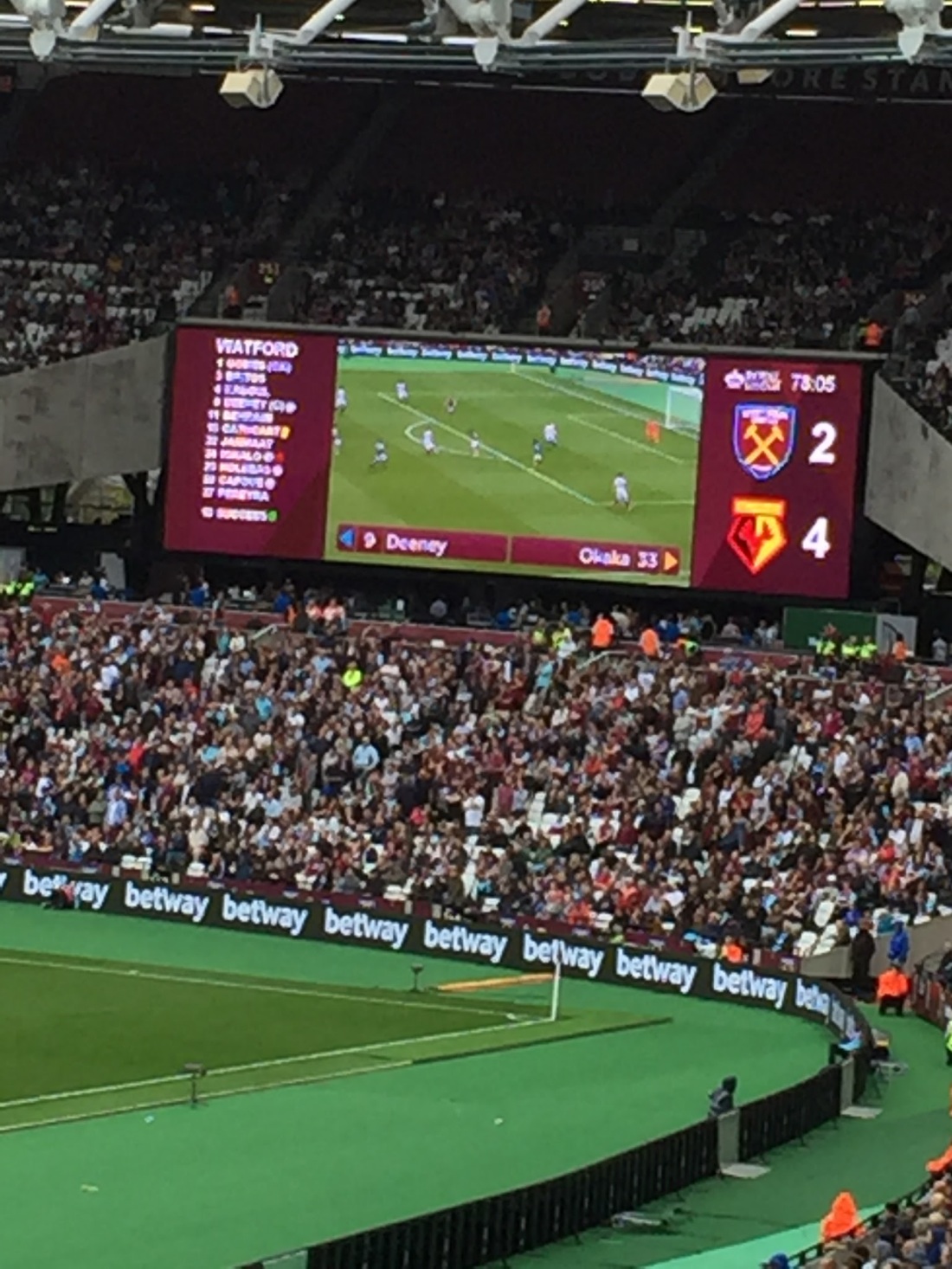 So another interesting day of growing pains in the OS yesterday tapped off with a poor performance.

Payet was back, and Antonio was placed back in his rightful position in midfield. Zaza started up top, and with the exception of Byram being played in front of Arbeloa we probably had our strongest team in my opinion. That opinion has now changed, but lets get onto that later.

END_OF_DOCUMENT_TOKEN_TO_BE_REPLACED

Yet another freezing cold evening took mrben09 to the fortress of Upton Park, for a semi local derby with Watford. A team that used to have such luminaries as John Barnes, Luther Blissett, and Elton John, are now a confirmed championship side, but should of provided no competition to a Hammers team that so convincingly beat Cardiff the previous Sunday.

Collinson and Vaz Te were dropped from the starting line up for Matt Taylor and Julien Faubert, a move that i saw as positive and that nearly reaped rewards, as MT hit the bar after about 50 seconds from a 35 yrd shot. I’m afraid after that we huffed and puffed, and apart from a sitter missed (a recuring theme this season, Sam, get these guys practicing ) from Faubert following a MT cross, we stumbled towards half time. The front line appeared to be not engaging with the rest of the team, apart from flashes of co-ordination from CC.

The second half proved a different proposition with WHU pummelling the Watford penalty box but with no end result. I say penalty box, as shots were thin on the ground. With about 20 to go, i pointed out to Angry John, that Watford seemed to be getting on top. At that very minute, Watford scored a goal out of nothing, with a long range grasscutter, hitting the inside of the post and its one nil Watford.

Then it became charge of the light brigade stuff, with long balls to CC, and follow ons. To be fair CC played really well for all of the second half, winning about 80% of balls in the air, and laying off well. With about 8 to go of nomal time, Vaz Te managed to get on the end of a cleared corner to shoot through several players and equalise. Good news, but still we ploughed on. Due to a serious injury to a Watford player early in the secong half, there was 12 mins of extra time. More bluster from WHU, but no goals.

So in short, a disappointment for WHU fans, but a point at at the end of the day, that we needed to dig out. This is good practice for next year (assuming promotion). MOTM James Tomkins, who pretty much  collected everything aimed near him all night, and made some crucial interceptions, and appears to be learning well from Faye.