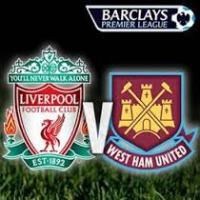 Not having won here for 50 years, I wasn’t expecting WHU to tear up any trees here today at Anfield.

We started minus Andy Carroll for loan condition reasons, and drafted in Carlton Cole to lead the line. It was telling that after 10 minutes the commentator pointed out that WHU were playing with a back six! We were defending a constant stream of Liverpool attacks. This seemed to get even more intense when Sturridge replaced and injured Downing after 25 minutes.

Collins and Tomkins (in for the injured Reid) seemed to be blocking and tackling everywhere.

Diame for WHU was making to odd forage forward but Cole’s lacks of recent games seem to be showing with poor touches and non-existent passing. Towards the end of the half a loose pass from Liverpool led to Cole being straight on goal and his shot rebounded from Agger when it should of at least made the goal. WHU made some reasonable attacks towards half time but it was Liverpool on points at half time.

The second half was more of the same, but with WHU having a little more of the ball. Collins seem to have moved man to man on Suarez, which worked most of the time.  Jarvis was seeing a lot more of the ball and seem to be breaking down the Liverpool defence, especially  Carragher. Liverpool had countless attacks repelled, and a good shout for a penalty when Gerrad was taken down by Tomkins. The replay to me, showed it was a blatant pen.

In the last 10 mins Pogatetz had to come on for the now injured Tomkins (get well soon Reidy 🙂 ). Collison had a great header cleared off the line by Lucas for an unlikely first goal. In the absence of Tompkins, James Collins was immense in the last few minutes of the game.

No one will deny that this game was Liverpool’s to lose, and with a point today they will feel they have. However it is another step for WHU towards premiership continuity, which is needed even more with the extra money coming into the league next year and the impending move to our new stadium.

James Collins gets the nod for MOTM as he was immense, but Jussi, Diame, Jarvis, O’Brien, and Tomka all put a shift in.

All in all a frustrating game for both sides fan’s to watch, but for different reasons.