The last time I saw The Who was 1985 at some football ground near my venue for tonight at an event called Live Aid (does anyone remember this !).

So we have all moved on and The Who have become one of those bands that they can do an entire tour where they just play one album. The album in question was the second “Rock Opera” written by Pete Townsend, the legend that has spawned a film and influenced more than one generation (including me !), Quadrophenia. The story of a young man and his passage through his late teens where he learns that Monday to Friday are still an arse no matter how good the weekends are. Anywhere !

We open and close as you would expect with Love Reign Over Me. Both are elongated versions to take into account the well put together visual trail of news events from WW2 to 1963 and ending with 1963 up to now. The real band these days only number two but with some serious players in the extended band (including Pete’s brother, Simon Townsend) the original West London band, fire through the set like teenagers. The main highlight for me was always going to be 5:15. They didn’t let me down even including a bass solo from John “The Ox” Entwhistle. Using some clever tech they managed to have a solo from John on on of the huge screens, and fed the sound perfectly. Crowd goes wild ! A bit of digging found the solo here. Keith Moon wasn’t left out as he had plenty of footage on the big screen (which was a Vespa headlight and indicators).

Post the refrain of LROM, we get the classics, Baba, Pinball Wizard, and Who Are You et al. No My Generation though, maybe dying before you get old isn’t as bold a statement when you are 70 !

All in all, exactly what you would expect from a band who have been playing these tracks for over 40 years. The energy in Roger Daltrey alone has puts me to shame. Great tracks , great night. 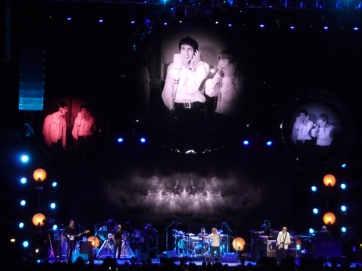