We took the virgin train up from London Saturday lunchtime. Now first class on virgin is lovely, and pleasant and all that, but the “free” wifi is shocking. Patchy does not describe it. So advice for anyone doing this a lot is to get a mifi or a good data plan.

We arrived into Manchester Piccadilly mid afternoon and head off to out hotel in the Deansgate area called Innside (across the road from the site of the UK first superclub (The Hacienda). It’s quite a new place and although not as imposing as the Hilton across the road (ish) it does have a personality of its own. Point one and this cannot be stressed enough, the bath is in the room. E.g. there is a bed in one half of the room and a bath and basin in the other half. Now the angles mean if you were laying on the bed right way round you will not see anyone in the bath, but you can hear them and chat to them as if they are in the room. Mainly because they are. Thankfully the loo, is hidden away behind a door.

Anyone , once we had a small lay up we headed out to meet @vintagecatuk and @thesummats for a meal and a few light refreshments. We managed to score a table at the highly rated @thebotanistmcr. And life was good.

Food was lovely although service a little patchy, but it was rammed full. We then retired for drinks in their bar, which also had some live music going on. I tried a cask beer called Red Willow, which came in a jug. I haven’t seen one of these in a bar since God was a boy, so it was quite novel, but after a couple you know why they are not used any more. They just feel misweighted in the hand. I think I have just made up a word there, feel free to submit to the Oxford Dictionary. As an aside, we actually ventured back there on Sunday, and it was way more chilled and a greater experience. We also went to the Wellington (the oldest pub in Manchester, with a very interesting history)  for dinner on Sunday post game. Great food, and really friendly staff.

Sunday morning we tried the breakfast in the hotel, and it did not disappoint. All local produce, and cooked to perfection. Just what we needed for what was going to be a busy day. We had to take into account the fact that daylight saving had come into play as well. My phone was playing up some as I had to manually set the time, and then it would keep changing back. This went on for about three hours, until it dawned upon us ( after a google) that we were 2 weeks early. Doh. With an hour in our pockets we grabbed some lunch in Revolution under Deansgate tram station.

Then we were picked up for what was the main event of the trip, our date with FA Cup destiny at Old Trafford. Safely (!) parked we headed off to the ground. To be fair the general consensus for both ourselves and our Mancunian hosts was that this was not going to be a cracker.

Entrance to the ground was well managed bearing in mind we had about 6 times the normal away allocation, and we climbed what seemed like about 1000 steps to get to block E36. At the top of the stairs, we were greeted with deafening chants of “We’ve got Payet” ringing around the concourse, and several overpriced weak lagers being thrown about. I bumped into a couple of people I know from home and we made our way around the throng and found our seats.

My fear was Payet would either rip them apart or partake in one of his more recent developments, the quiet game stuck out on the wing. The latter seemed more likely based on the early part of the game when both teams were practically circling around each other looking for chinks in the armour. Winston Reid was unlucky when he slipped and went straight through Rashford with about 2 minutes on the clock to pick up the first yellow of the game. As you would expect, most of the possession was held by the team in red, but WHU played their part with both Carroll and Emenike going close.  The only interest for me in the first half was the noise from the West Ham fans. 9000 people who may have had one or two adult beverages was never going to be quiet. We really did not stop, and drowned out the United noise from the tier below easily.

So half time came and went, and I think the whole ground wanted a better second half, but it did not start out that way. Man U had a couple of chances go over the bar from Hererra , Antonio made some runs down the wing for us, and Fellani got run ragged by Mark Noble ( in front of Roy Hodgson , who should do the decent thing, but won’t).

About half way through, Payet made a run on goal, and was turned down for what looked to me, to be a stone wall penalty. Refs a homer at OT ? Unheard of. Anyway this must have riled Dimitri up, as  a couple of minutes later, we had a free kick, just short of 30 yards out. A little far for a shot but almost too close for a chip in. What to do ? How about step up and fire up and over the wall and into De Hea’s top right corner . Amazing scenes ensue. This was it, off to Wembley and the Dimitri show rolls on. There were also some scenes where a couple of WHU fans were in the United block next to us. From the complaints and abuse being sent their way, and the rush of stewards you would think that the whole 80’s edition ICF were in there. But no, it was a middle class couple, on their own, but the wife had the temerity to be wearing a claret and blue scarf. Turfed out, because drunk grown men, were pointing her out to stewards, you couldn’t make it up.

On the subject of stewards, namely OT stewards, what’s the deal with the ballet that seems to happen about half way through each half, where all the hi viz brigade march up and down their allocated staircase with an almost military precision ? Odd indeed.

So , in a rerun of last season, we decided to sit on our one nil and were punished when the very lazy Martial popped up with an equaliser seven minutes from time. That said , Mr Schweinsteiger appeared to be taking out our keeper as an assist, but hey, the refs not a homer ( especially in front of the Stretford End) as pointed out earlier.

So there you go, one one, and we do it all again at the Boleyn, sometime soon, which I believe means both of our last two night home games will be against Man U. Rather fitting as the atmosphere is always good. And for the first time in a long time I think we will win the replay. See, I’m not always a pessimist!

A draw will be seen as a fair result in the annuals of time, based on stats, etc, but in the real world, if the ref had stepped up, WHU should have had the win. But everyone got to see a contender for goal of the season, and we get another game at UP before it disappears from the rich footballing landscape forever.

West Ham overall , played well, but  Reid was a little out of sorts having been out for a while and the rash mistake at the beginning didn’t help. Most United fans I spoke to over the weekend are not happy with LVG. And if he serves up that style every week, I can understand the opinion. West Ham, if they are to progress as as squad have to start playing from the beginning and not just playing for half time. It has been a repetitive theme this season, and to be fair we have got away with it, but as the league gets stronger we will get punished. We now have the talent and steel to go toe to toe with anyone in the division, and need to prove that.

MOTM was Payet hands down, despite a quiet game.

All in all a great weekend, interrupted by some slightly above average football, with one moment of brilliance. “We’ve got Payet !”

PS As a slight adjunct to all of the above, were you aware Manchester might have a Serial Killer? No , neither was I, but “The Pusher” became a topic of conversation for a lot of the weekend. Over 80 bodies (all male) , have been pulled from the canals of Greater Manchester over the last 5 or 6 years. This is staggering, and I’m amazed it hasn’t garnered a bigger press draw apart from some tabloid rag stuff, very recently. 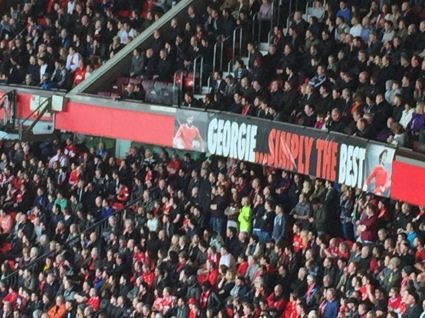 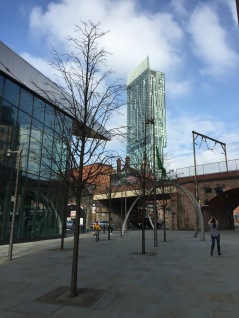 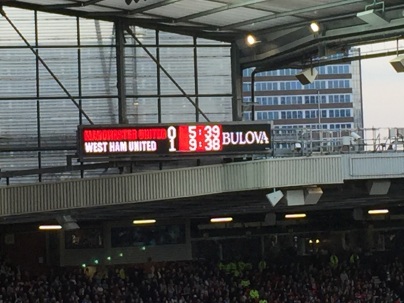 This was about 30 seconds before the equaliser. Doh 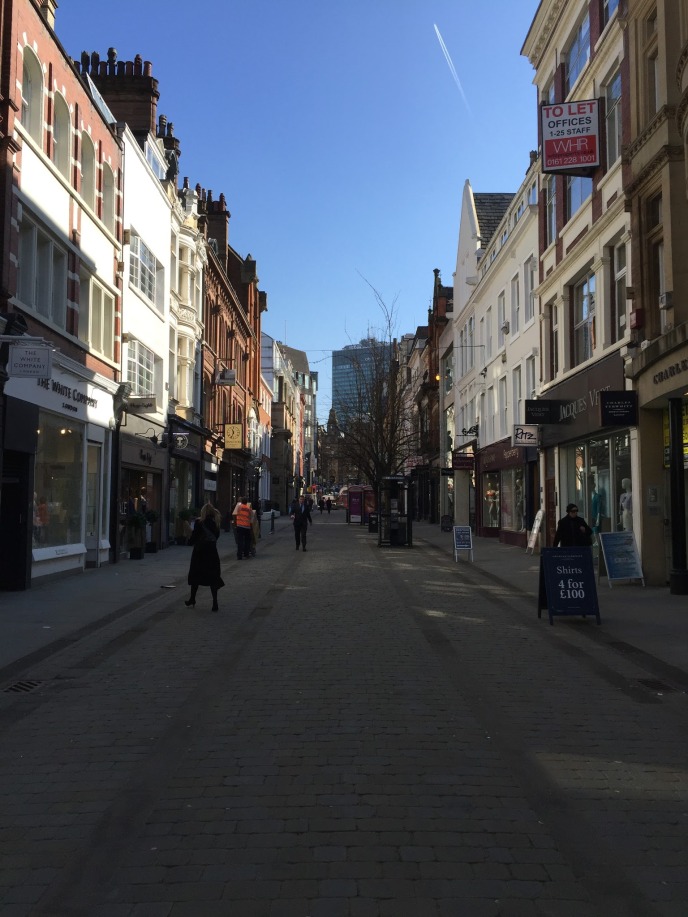 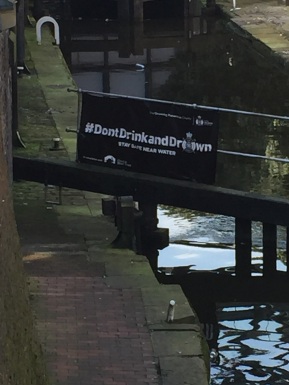 Good advice, mind out for #thepusher 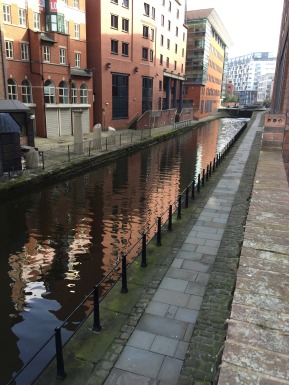 There’s a game somewhere down there 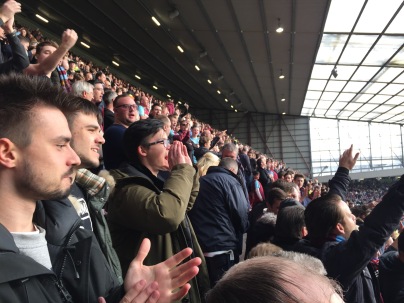 The Arches of Manchester 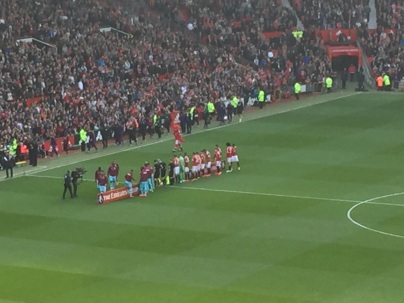 On behalf of the committee…..