The NFL International Series (do they still call it that ?) is upon us, and once again my team the Oakland Raiders is hosting a game in London. Anything to save the rent on the Coliseum. Anyway, suits me. When they move to Vegas, I might get to see them there as well. I’ve been over there once or twice…. This was my third time watching the Raiders. All in London.

The opposition were the Chicago Bears, who were on a 3 game win streak, and on paper looked better than the Raiders. The Bears have one of the best linebackers in the game, in Khalil Mack (ex Raider) and Oakland have a leaky guard and tackle set up. The only thing in our favour was Mack and Derek Carr are best buds so maybe he’ll take it easy on him !

The trip to the ground was uneventful , and the wander up Seven Sisters Road bought back memories of old trips over here with West Ham. (Gary Lineker hat-trick on a cold wet evening, anyone ?).

The new Tottenham stadium looks like aliens have landed in an estate in Haringey. It’s seriously impressive.

Outside the stadium there was less to see and do than Wembley, but if I’m honest, the British aren’t really into the whole tailgating scene. Its more a beer, maybe some food and get in for the Anthems. They did have some stuff for the kids and things to get your photo with, but no lines of food trucks, and cheerleaders, etc.

Which is pretty much what we did. Met up with some friends (Bears fans !) pre game in a local, pub and a few libations were had. Met the Raiders Squid in the garden of said pub. Odd outfit.

Inside, the ground is amazing. Space for everyone, and plenty of outlets, and its own brewery. Pretty impressive.

Big shout for Rhys for sorting out tickets at the very last minute. Thanks to all the via-gogo, stub hub, ticket touting robbing tossers for me not getting tickets on launch!

Chicago’s starting QB was injured and therefore not playing which was a bonus, and we kept things tight and ended Q1 with a 0-0 scoreline.

The Raiders lit up the second quarter,taking names and driving in (Josh Jacobs especially) 2 touchdowns and a field goal to go 17-0 up at half time. WHHHAAATTT ! To say I was happy, was an understatement. However, things were tempered by the food and drinks service up on level 5. Complete disaster compared to the more quick food court style of downstairs. 20 mins for a packet of crisps ? No thanks.

As usual for any team I support, you are never safe, and the Bears hit back with 21 in the 3rd quarter. Carr at one point, just chucked the ball to nowhere, overturning to Mack in a bizarre move. We also had one interception ripped out on our 1 yd line. Grrrrrr

So the witching hour arrives and I am in familiar territory. 0-3 for me ? Maybe.

Carr managed to get us up the park ,using the running game that I admit I’m not a fan of. Josh Jacobs finished off his MVP performance jumping over the pile of players on the line to put us back in the lead with 2 to go.

The Bears piled it on and the game looked like going OT, but a long ball from Daniel was intercepted and that was that. 3-2 for the Raiders this year. 1-2 for me alltime !

England went into this game clear leaders in this group with their opponents sitting in second place. A 3-1 win at Wembley extended the group lead to an almost unassailable 6 points, with England now 4-4 in  qualification games. With that all said, England are still not operating at the top table of International Football, and and times were frustrated by a far weaker team.

Today was Rooney’s day. He was playing in his 100th game and was presented with a golden cap from Sir Bobby Charlton. This may of been through gritted teeth as I have covered on my last England visit.

England set up with some new blood at full back with Nathaniel Clyne and Kieron Gibbs, coming in for the established, Leighton Bains and Glenn Johnson. This offered some pace on the edges of the field, which was going to be needed with the pedestrian midfield of Wilshere, Henderson and Lallana playing out of position. I am getting fed up with moaning about Wilshere and how he is not a holding midfielder, but there he was again. Henderson can play that position and does every week, but he is pushed up the pitch at England level, and plays alongside his team mate Lallana. I say team mate, the guy hardly ever plays for Liverpool, and also should not currently be an England player. If you want two holders and a traditional midfielder to play off Sterling, how about Henderson, Noble and Wilshere (further forward).

This poor line up (positionally) meant England had no shots on target in the first half. Every ball forward went to Rooney, who was doing his damnest to score, at the expense of Sterling and Wellbeck. Shocking first half. The playing style was typified by a Jordan Henderson OG admittedly against the run of play in the second half. This seemed to spark England, with the reply almost instant, as Rooney got in the box and won a penalty. Personally I don’t think he was touched at all, and I had a great view. Rooney stepped up to get another goal for his tally, and England really pushed on from there. All of a sudden, the team realised Wellbeck was playing and in his usual lackadaisical style he added another 2 goals to his tally, with Sterling interchanging well with the Arsenal striker. If he keeps getting these goals, I think Rooney’s stint at the top of the scoring charts may be shorter than Sir Bobby Charlton!

Yesterday, my companions for games were the Aldershot duo of Ian and Albert. This was young Albert’s first visit to Wembley and being used to 1.5k at the Rec meant that nearly 90k in attendance was pretty awesome. I’m sure he had a great day out, and hopefully will see better performances in the future.

My MOTM was Wellbeck, and whoever voted for Wilshere, as was announced at Wembley, needs to take a long look at themselves.

One last thing, as regular readers will know. I am a recent convert to NFL, BUT the state of the pitch was shocking yesterday, covered in wrong coloured strips of grass, and the remnants of the gridiron pitch layouts and lettering. Just behind the goal was COWBOYS, and the yardage lines all up the left wing. This is our national stadium and our national game. This needs to be sorted. I’m sure it’s not to hard to use overlays for the non playing surfaces. The stud marks all up the middle didn’t look too great either, but didn’t seem to effect the roll of the ball. Click on the photos to see what I mean. 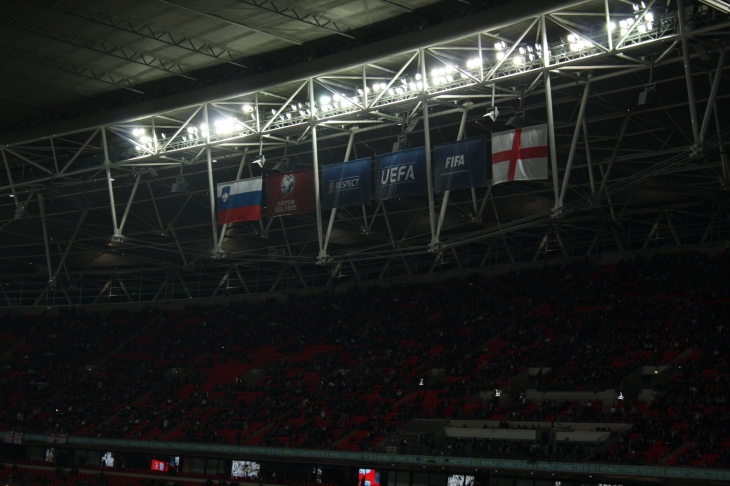 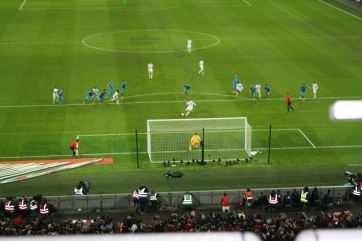 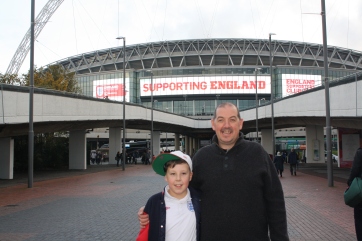 This is bigger than the Rec ! 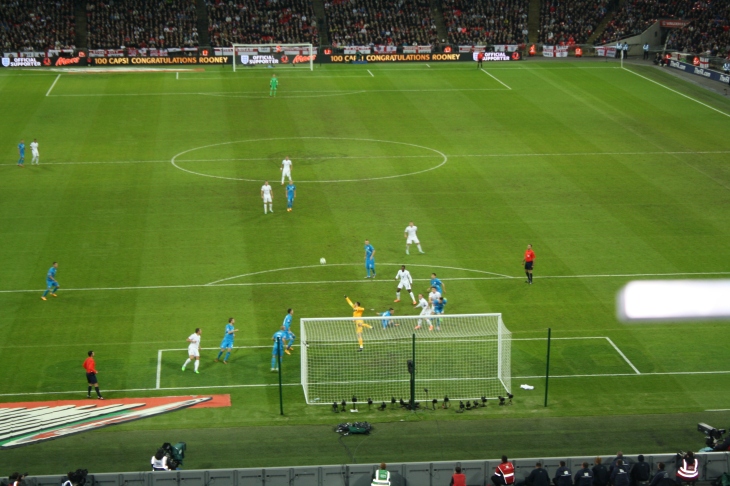 The arch as usual

Time for a new sport, not unhappy with the old one (s) , just fancied seeing something different. We managed to pick up tickets for the NFL International Series at Wembley. This was useful, as I’d wanted to try an NFL game, but didn’t want to waste a days holiday if it was rubbish.

A couple of train tickets and less than an hour later we are in Wembley, and we are at the home of Real Football ™ to watch a different kind of football.

The place was rammed, unlike a football game, there were people there from 11am for a 6pm kick off (punt off?). Anyway, it was busy as you like and full of fanzones and food trucks, and people and cheerleaders, and people (did I mention the amount of people ?). And lots of fancy dress.

Now I struggle to watch a sport of if don’t have someone to cheer for, but I don’t have a team, so i needed one quick. I had decided during the week, that if the Raiders were good enough for Public Enemy and NWA back in the day, then its good enough for me. So, a quick trip to the merch area to kit out and we are good to go.

The main fanpark shut early, so we wandered into the stadium, to see whats going on. First thing was, because it wasn’t a real football game, you could get a beer without too much hassle, and everyone seemed genuinely happy to be there. Odd I know, but hey sports fans, thats how it happens over “there”. This was an hour before kick off and the teams come out to warm up to boos and cheers, and the Cheerleaders were in full flow. And you can take beer to your seat. WIN

Then I noticed some trucks being wheeled on while the warm up is on. ??? Turns out it is a stage, so that Def Leppard (yep?) can knock out 4 hits in what is known as pre-game “entertainment”. As has been mentioned elsewhere, Motorhead would of been better, but it passed the time.

Then we get national anthems? WTF? For an international yes, not for what is a league game in all but location. Anyway, we finish spangling banners and saving queens, and then the main event begins. And do you know what? I enjoyed it, especially as the Raiders scored from the get go. RAAAAAAIIIIIIIDERRRRRSSSSSS.

I don’t think they made 20 yrds in any of their possessions. McFadden tries to carry the team on his own, and struggles. Carr, the young Raiders QB, was woeful with his passing, and his replacement McGloin wasn’t up to much either after fumbling a snap, and giving the ball away for the 4th Miami Touchdown.

The 2 minute warning goes and its time to leave, safe in the knowledge I have picked yet again another team with great support, and some good years ahead, interspersed with some shockers.

The Wembley tubes home were as disorganised as usual, just to remind us that we were in London NW, not Oakland CA.

Would I go again, yes, but only to see the Raiders, I really cannot handle non partisan sport. 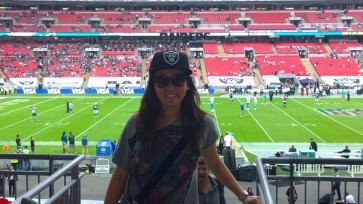 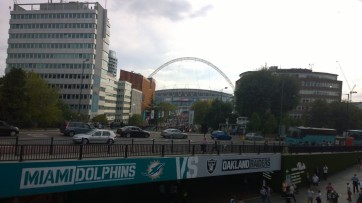 The other obligatory snap 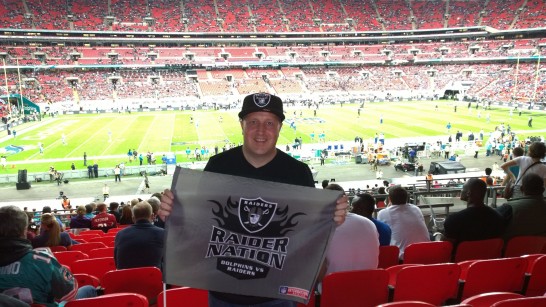 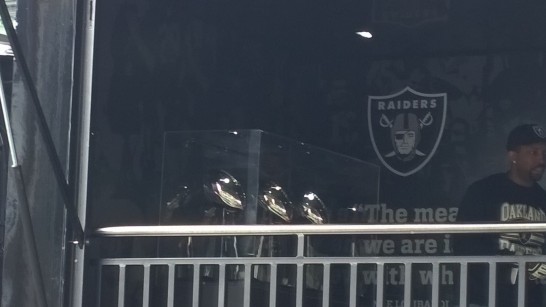 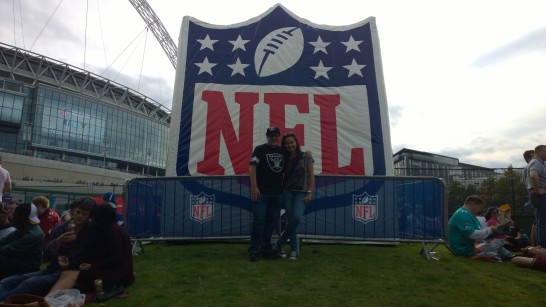 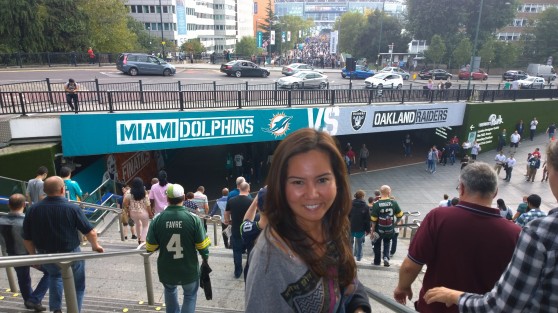 Obligatory snap from the station 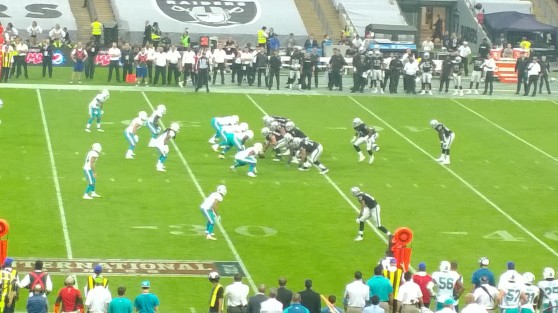 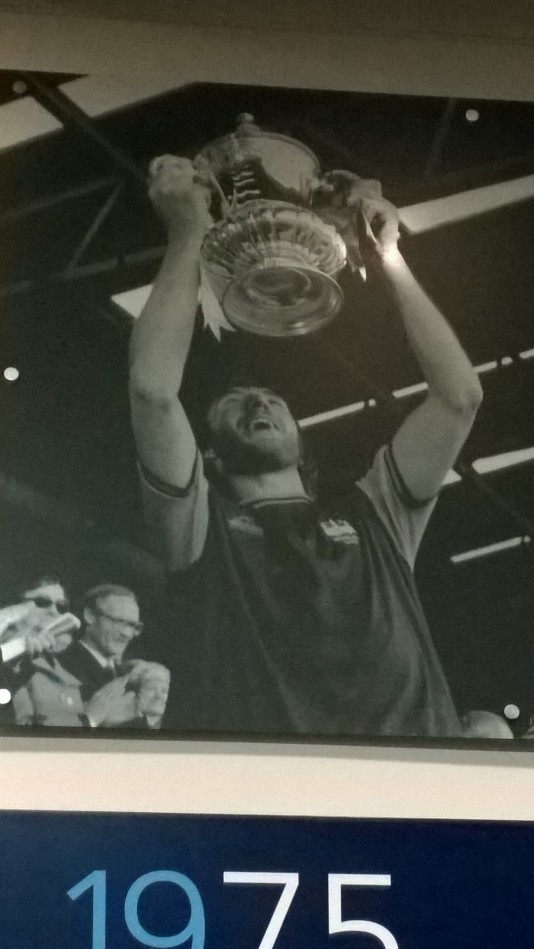 Insert own clown joke after this performance

A View around Wembley 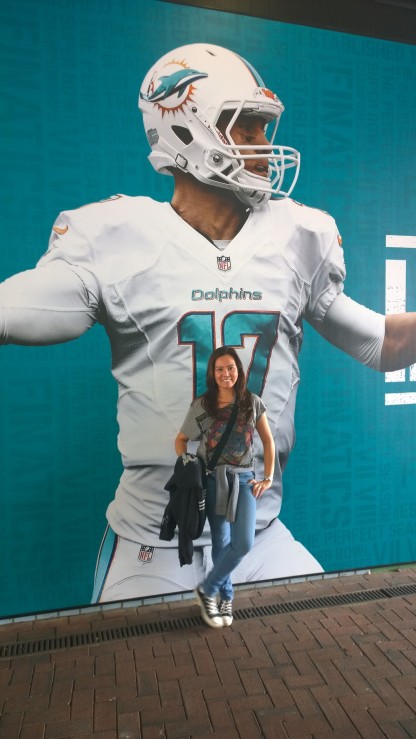 These lads are big 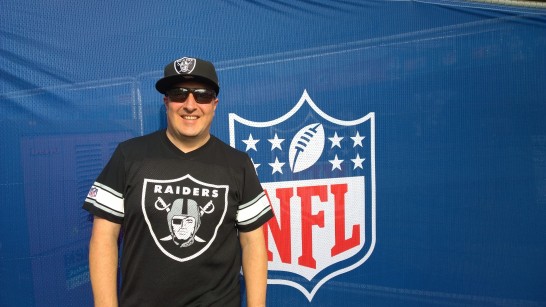 Just incase you were wondering what today was 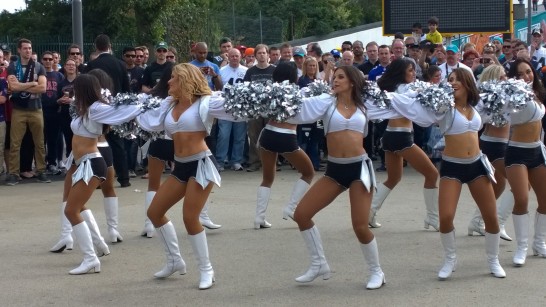 The Raiderettes, outside the ground 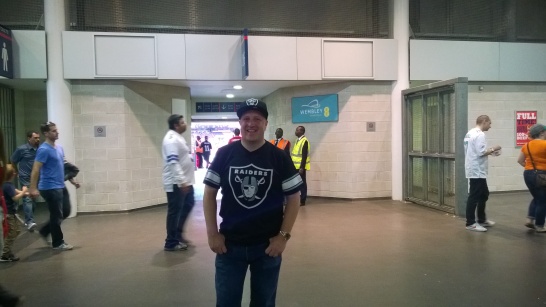 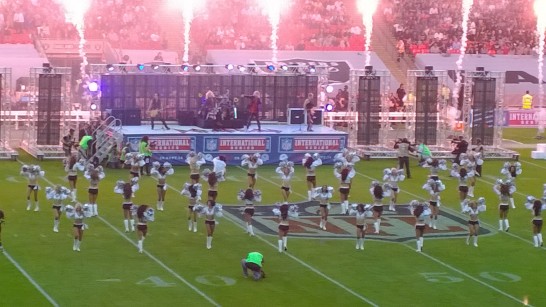