This was our first trip to Vegas this year and was long awaited as our first trip away since Easter. As usual we were flying Virgin, and they have reconfigured their planes a little. Due to their ultra expensive pricing for Upper Class, I imagine there has been a downturn in uptake, so they have taken Upper Class out of the top deck and replaced it with Prem Econ and Econ. However the Econ has more space than downstairs which is much appreciated by me !

So we settled down for our 10 hour flight, and it was noticeable we were being flanked by some Weekend Millionaires. This was borne out as the flight went on, as they got pissed, started arguing and if not for some very direct words from a stewardess might of got the flight prematurely landed. That aside, flight was great and we landed on time, and due to our position on the plane, were whisked through security in record time. Bags collected it was off to our usual haunt, The Excalibur, where once again we are graciously looked after by our host. We had a nice hamper of choccies etc in the room as we arrived ,which were just as graciously devoured!

Part of our deal was $100 in freeplay. Between the two of use we spun this around to nearly $200 cash, so good start to the week. Unlike previous trips, night one was a quiet one, and early bed. This is an unusual tactic for us but seem to handle the jet lag, so will be tried again.

Saturday was upon us in the morning. Quick trip to the pool for Mrs mrben09, quick trip to the poker table for me. 77 doesn’t beat jj, so that was me early doors. We retired to Tacos and Tequilas in the Luxor for lunch, and had some great Mexican grub which kept me going for the rest of the day. That afternoon , my wife’s cousin was coming in from Seattle,  so we decided for evening we should go upstrip, as Floyd Mayweather was doing his thing across the road, and it was going to be crazy down our end of the strip. So for the evening we met in Javier’s for cocktails and then went to the Mandarin Oriental Sky bar just outside for some more cocktails. This bar is on the 23rd floor and has floor to ceiling windows covering the whole strip as a view. Post drinks we hit the ever favourite Lemongrass in the Aria for dinner. Fantastic as always and remarkably cheap considering the surroundings. We left just as telecasts for the fight were finishing and the casino floor was packed to the gills. I had already paid for my Poker Tournament the next day so we retreated to the Bellagio and the YellowTail restaurant for a few drinks and a catch up. Suitably refreshed we headed across the road and a bit of a gamble up in Harrahs. We have never spent a lot of time here, but will be doing in the future. It may not match Aria and Bellagio for swank but the staff more than made up for it. Quick waitress service and friendly dealers made for a top night (and winning a few quid always helps). We also took a quick trip through the Quad (previously the Imperial Palace). This is still a work in progress but definitely an improvement on the old dark IP.

Sunday was my day. I have been a member of AllVegasPoker.com for some time but due to living some distance away, I’ve never been in any of their sponsored tournaments. Today changed that and I entered into AVP XIX at the Aria Poker room. Post registration and picking up my freebie t-shirt and other goodies I met some people that i have conversed with online for some time. There are photos of me at their facebook page from here, but i wont be linking them. As usual with the Aria the tournie was well run, and I got to the first break without to many dramas. I shared my table with 2 AVP employees, and was quite amused to watch the CTO completely suck out on the Marketing Manager to much abuse and incredulity. The first price for just over 8k, so i needed to get some hands and post break the antes were biting and I needed to make a move. The move turned out to be a disaster. I was dealt 10 10 in mid position. I called a raise, and two of us saw the flop. the flop was 9 jq so i shoved with the chance of a open ended straight. My opponent tabled a jq and won the hand. So out in about 2 hours but a decent time non the less. Before i met the girls (who were in the middle of a  4hr (!)  buffet in the Cosmopolitan, I hit the Blackjack table for a quick $200 win. Although everyone at the table was nice, i noticed they thought i was a little odd. Why was confirmed once I left the table and realised i still had my AVP name badge on while playing. Oops.

We ended up the evening at Harrahs again and won a few quid.

Monday was a 9.00 start at the Excal crap shoot poker tournie with Michael from Australia who i had met the day before at the Aria. He bombed early just before leaving to start his 2 day trip home and I held on, to finished 3rd and triple+  my buy in . Good start to the day. We then did our usual pilgramage ti the North Outlet stores and hit the shops. Some good golf gear was picked up a new suit amongst other things. In a non holiday move we had a Genius appointment with Apple in the Fashion show mall early evening . Using the usual “it’s only up the street” approach we set off on our walk. 1 hr 20 minutes later in 99 deg heat we were at our destination and knackered! But we got a replacement Iphone 5, so all good. Dinner was in ZoozaCrackers in the Wynn. I didn’t have the burger but it look amazing, but the nachos did well enough for me.

Tuesday we cashed in the first of our myvegas (facebook promotion) and had a free brekkie at the MGM buffet. Not as big a selection as I thought the worlds biggest hotel would have, but all good nonetheless. Being in the MGM meant I had to play the 11.00 am tournament at the MGM poker room. The current location for the room is shocking and no wonder takings are down. However the staff are professional as ever. Unlike my poker, I was out quite early, having got no hands or worth, and losing a straight on straight (10 vs J) pushed me passed caring and I shoved until i could leave ! We had a late lunch in our secret hideaway off the strip, Kapit Bahay. This simple Filipino restaurant never fails and once again the beef steak and pancit were tasty as ever. So much so we went Friday as well.

Wednesday was a long day. Lunch was in Buca di Beppo in the Excalibur. The large portions kept us going until the evening, where we used another voucher for a large saving in Plant Dailies in Plant Hollywood. This is just by the escalators up to some other restaurants and the nightclubs. This meant we were delayed by about a million people trying to get photos of Justin Timberlake and Ben Affleck who were there promoting their new film Runner Runner. From there we went to see Vegas the Show . This is a variety show charting the history of Vegas as a resort destination from the mobsters up to current day featuring hits from Sinatra, Tom jones, Elvis and Elton John. Well worth the price.

Post show we headed home and hit the tables. We lost a few quid but that was on the cards as we had hardly spend anything in the previous 4 days. Thats when we met Betty, Rita and Biscuit (false names, as you may of guessed). 2 50’s style ladies and one completely normal lad, all hailing from Essex. They were great fun, and we stayed at the roulette table until 6 in the morning. Everyone won and the crack was great. Biscuit could not lose and ended the evening with a $25 drop on the 00. This comes in to great cheers and $875 to Biscuit. During this early morning gambling session we also met Alan from the Hangover (maybe). I say maybe as he hardly said 2 words for the hour or two he was with us but the photos show he could of been.

Thursday was a late start as you could imagine, so we cashed in another myvegas token for the Aria Buffet. Way better than the MGM and definitely one to be done again. This led us the relaxing part of the holiday and we stayed pretty local for the rest of the week. I played the Luxor tournie Friday morning to no avail, but got a few decent runs on the craps tables to get the money flowing back my way for the trip home. We ended our trip on Friday evening in Michael Minas pub 1842 in the MGM for a really nice meal with some local beers. I lodged the Dirty Dog (not nice, had it last trip) in favour of the Anchor Steam from Cali. not bad for a American beer, and a vast improvement on the DD.

Our flight was delayed on Saturday but at least Virgin let me know via text, so fair play. We had a very late checkout from the Excal, so it was like another days holiday, and the craps table was good to me again.

All photos taken by me on this trip were with the Nokia 925, and for a mobile they came out well. The others are from a 4S.

Where I ended in the AVP Tourament 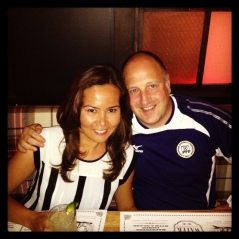 With dancers from Vegas the Show 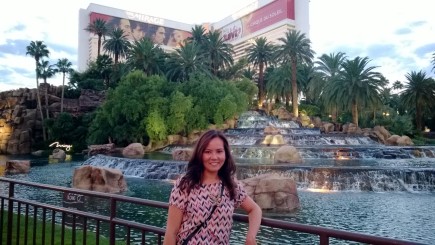 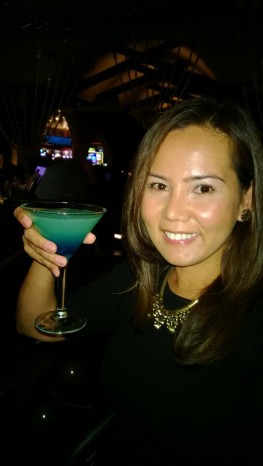 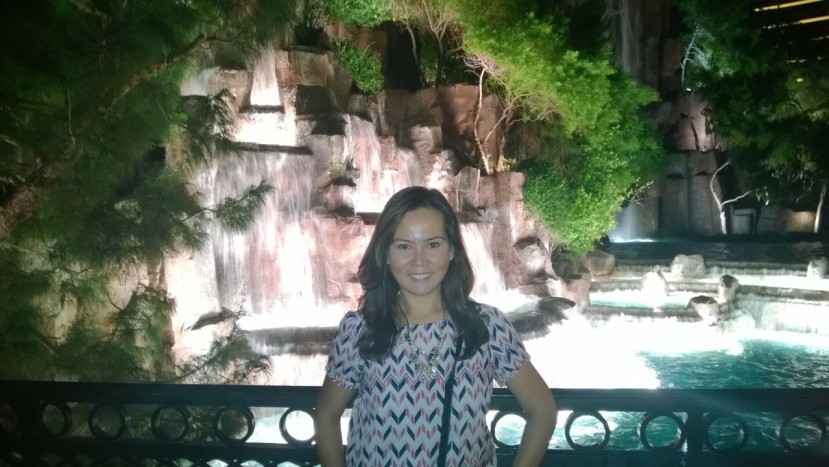 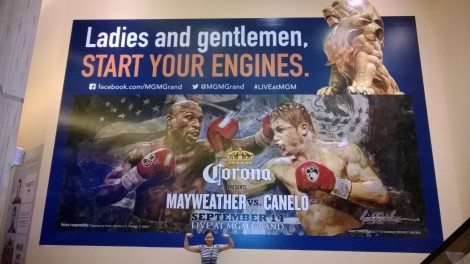 Not what you see everyday in Vegas

The Hamper in the room. Nice touch.

The oldest working gaming machine in Vegas. The Sigma Derby 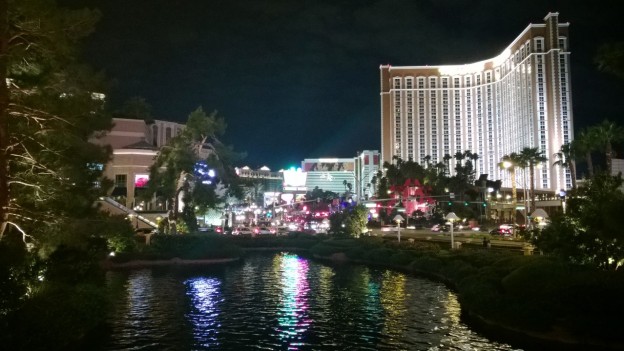 Down the strip from the Wynn 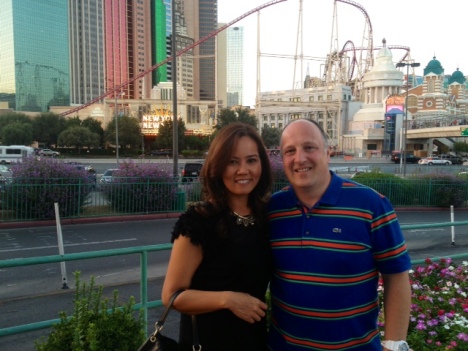 NYNY in the background