After an unbeaten qualifying campaign and littered with too many draws, Roy Hodgson’s England need to win their remaining two games to secure qualification to next years World Cup. Both are at home, and the right results are possible, but first up were Montenegro, who England have had four previous tussles, all ending in a point a piece.

The weather was shocking and travel was not much better with an hour delay at Ebbsfleet. The tube trip went a little old skool when a north south divide looked to kick off on a packed train.

So a lot later than expected we took our seats and i was quite pleased to see Hodgson had picked a remarkably attacking formation with Rooney, Wellbeck and Sturridge all starting. Also starting was Tottenham’s current flavour of the month, Andros Townsend in front of his team mate Kyle Walker. Joe hart was in goal following the worst run of his career, cementing the manager’s faith in his no.1.

The initial play was pretty cagey with England getting the odd chance and as usual at Wembley this set the tone for the rest of the half. Just before half time, England had their best chance when Wellbeck tried his usual reverse back heel to no effect. He needs to cut that out of his game.

The second half started better with Rooney getting on the end of a Wellbeck shot that deflected into his path. England pushed on post this and got their second when a Wellbeck shot was deflected towards goal from its initial route by a defender to register an OG. OG is actually the 3rd highest scorer for England these days, just 2 goals behind Gary Lineker! England looked comfortable and the subs started with Lamps coming off for Carrick. Then the away team scored and you could feel the tension. We knew the Ukraine had already beaten Poland, and so another draw would not be enough. The clouds dispersed when debutant Townsend smashed in a cracking low 20 yarder to open his account. This ended the game as a contest and the icing on the cake was when Sturridge won and scored a penalty just after the 90.

The scoreline did not reflect the game, and England will need to step up in the middle of the park next year in Brazil if present. However the bold attacking formation was a massive positive as was the selection of Townsend (if only because Walcott and Lennon are injured). Let keep that up for Poland, and moving forwards as a more pressing team. This should not remove Ricky Lambert and Andy Carroll from the frame though, as sometime you really do need just to lump it.

MOTM : Townsend. Looked completely comfortable on this stage. Tore up the wing like he did last week against WHU (thought i wouldn’t mention it? LOL). 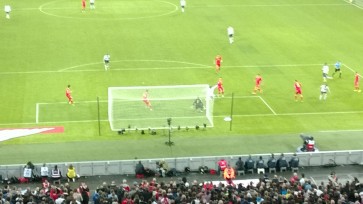