Little bit later than expected, but heres the 3rd consecutive NYE report from me in Vegas. First off, it was a lot warmer than last year, which was great. Looking at the states now, looks like we timed it well.

We flew from London in premium with Virgin, which was a great experience thats needs to be repeated. Good service, good food and a bit of space. Arriving in Vegas refreshed we picked up a 2013 Impala which we had for the first 4 days. This made a massive difference in getting about and visiting places we usually wouldn’t of bothered with and saved a fortune in Taxis. First point of note. In and out isn’t open Xmas day (or at leased the one between the strip and the Orleans isn’t !). That night was pretty quite outside a trip to Palms ( http://www.palms.com not in a rush to get back !)

After another good night kip we hit the sales at the North Outlet Centre where i got all my xmas pressies and Mrs Mrben got some nice goodies as well. The trip back was interesting, as the ramp on to the I15 was shut and we had to take a detour into the bits of vegas people don’t see on the Travel channel. Driving down streets where everyone is sitting on the kerb, and the people standing up are nearly all pushing shopping trolleys and you don’t know where you are, sharpens the senses somewhat.

Anyway we popped in to the Hardrock Hotel (http://www.hardrockhotel.com) on the way back and it looks good enough to visit again. The layout is good and the music was fantastic, just a shame it was empty. More of a summer venue from what i understand.

The following day, was the big day out, with a trip to the Hoover Dam. First time i’d been there, and it was amazing. We did the full tour, and it was worth every penny. We went 60 stories down(!) in a lift and through some rough hewn tunnels to see the turbine room which is just massive. One of the many intersting things regarding the Dam was the fact it straddles the state line between Arizona and Nevada which also has a one hour time difference, which must be a pain if you live on one side and work on the other, which you can get to in 10 minutes due to the recent addition of the memorial bridge which speeds up the crossing no end for the non tourists. I’ve tried to get the scale of both in the photos but they are just huge, trust me. Having spend all day there we had a quiet night but on the way home visited the Pinball hall of fame. Now this is my type of place. One massive room full of pinball tables and old school arcade games. We spent a great 2 hours and a whole $5 and had a great time. A must do on any gamers Vegas visit. A quick visit my first IHOP for pancakes and we headed off. That evening we visited the Orleans, which had been on my list of off strip casinos to visit for many years. This place is as good as most strip casinos and was very busy as they also (for now) host the Vegas Ice Hockey Team. We also went that evening to another first for me, The Boiling Crab Restaurant. The food was good, but that was not the most memorable part of the journey, if fact the journey itself was. The states and the UK drive on different sides of the road, and that usually isn’t an issue . Unless the sat nav tells you to turn left and see a gap in the reservation of the 8 lane road. And you go for it, and then see the 2 lanes you are in both have arrows on pointing in the opposite direction to my direction of travel. Anyway, death averted as nobody came the other way, and i sped off back to the right side of the road.

Next day we had to give the car back, so we visited one more place, post lunch at the ever impressive Lemongrass, the National Atomic testing museum. As you may know, Nevada played a big role in the development of the Nuclear Arms race and this place covered all the history really well, with real bombs, etc on display.

With the car back at the airport, the gambling and fun began. That evening I had a nice craps run and put $500 back in the kitty. Next day I undertook my one and only Poker session, at the MGM.  met up with Rob who I knew from allvegaspoker and his great blog. This was very appropriate as I got broken twice when holding the dreaded pocket kings. These are a staple of his blog, take a look. Dinner was back in the Aria for Five 50, their new pizza place. Massive pizzas, massive taste, terrible service, 4/5.

We were expecting friends on the Sunday, but due to a no show we headed down the strip to the shops at Caesars. They have the worlds biggest quality watch shop, and how I got out of there without spending all my pension was a miracle.

Monday was a food day, with the buffet at Mandalay Bay for breakfast and Buppo Di Beppo for lunch. Full. Full stop !

Next up was NYE. Nice day in the Casino with a $750 small jackpot from a wheel of Fortune machine. Good start to 2014 ! NYE on the strip was probably our best ever with a great position for the fireworks. Not as busy as usual (335k people on the strip down from 350k!).

Home next day, and a well earned kip on the plane nearly all the way home. For the record, Mrs Mrben came home with a whole 8 bucks less than she went with. All the more for next time. Enjoy the photos ! 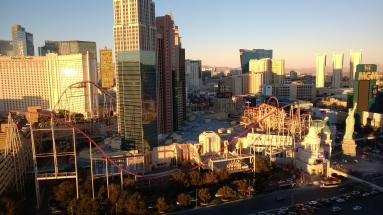 View from the room – Standard.

That water movement is about 100ft wide !

Arizona to the Right

Paris in the winter 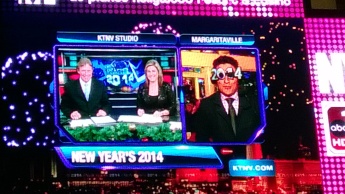 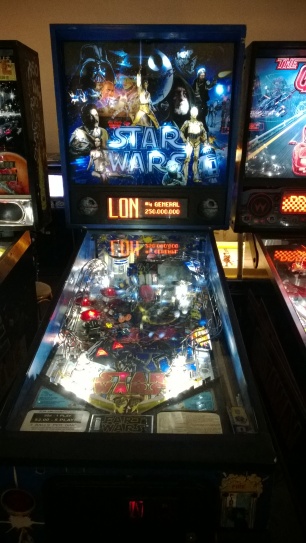 I need this at home

Nevada to the Left

The pinball hall of fame

The bridge from the dam. 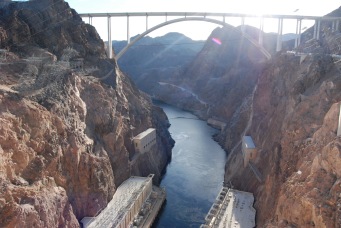 The Dam from distance 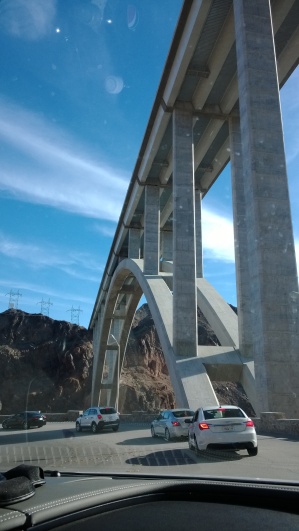 The memorial bridge from our car

Reckon you could board this ? 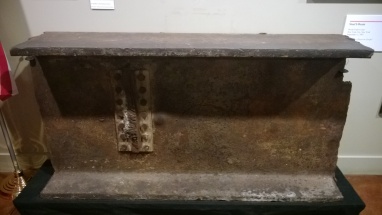 A steel from the WTC at the National Atomic Testing Museum 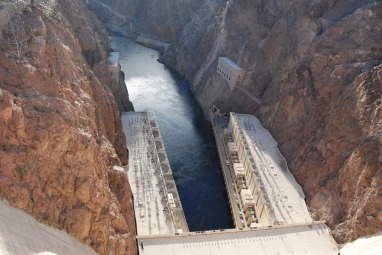