Where do I start with this one? Near the end as we have Man U tomorrow and time is of the essence I’ll be brief.

Once again big team syndrome prevails at Upton Park. Arsenal were allowed to dive and cheat their way through a game whilst WHU were booked for the slightest indifference. We had a goal ruled offside (Lanzini) early doors, that clearly wasn’t.

Arsenal’s first goal came about after Monreal dived in the box, and ref said no foul and indicated a dive. So surely a free kick ? No, but we stop, thinking yes, and Ozil scores.

So MOTM is obviously Carroll for his first WHU hatrick. The game ended 3-3 and probably ruined our CL chances and Arsenal’s Championship assault.

One thing I should add, is the atmosphere. When we scored our second to equalize the game, while everyone on the pitch was celebrating with Carroll, Noble was running around the centre circle on his own, and Adrian was shaking hit net , while facing the crowd, like a madman. And the roof was coming off.

Same again tomorrow night and we win. The normal pessimist me has gone. I even tweeted while we were 2-0 down that I thought we would win (just as Carroll got his first)

All the way from Aus, mate 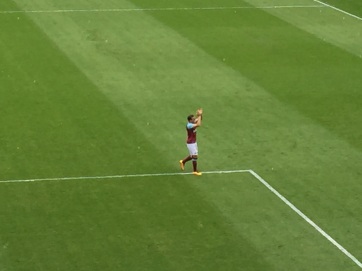