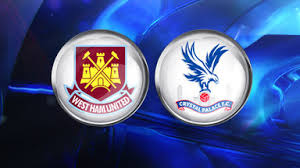 Palace are without a win in the premier league this year and WHU are tearing up trees pushing for a CL spot. But in true West Ham style we blew a gift. Everyone seems to the blaming the ref, but I differ, and will explain below.

West Ham came out the blocks confident and way on top with some crisp passing and pressing. But as usual these days no real punishing moves up top. With Sakho back in for Carroll  / Valencia, I was hoping his pace and intelligence would open up these slow starts, but no.

With Palace being the team who commit more fouls on average than every other team in the league, we obviously had our not so secret weapon in Payet, waiting to pounce, and we got our first opportunity about half way through the opening 45. He put it just over the bar, which surprised everyone in the ground, with his recent form.

However it was Palace who opened the scoring, due to a very poor piece of handling by Adrian who literally cheaply palmed the ball out to Delaney who headed it back in. Everyone seemed to be complaining about something in the lead up to this that should have been picked up, but i didn’t see anything and basically all footballers should play to the whistle, whatever their opinion.

As you would expect, this livened us up somewhat and we started the threaten more. 3 minutes on and we were back on level terms with Lanzini getting on the end of a clearance to thread in a neat finish. Normal service was resumed just before half time when Payet fired in another free kick from distance to put us back in the lead. The delivery this guy has is just pure brilliance.

The second half was more of the same, with West Ham having most of the ball with no end result, so while our CL rival Arsenal and Man City (who thought I could ever say this !) were smashing 4 past their opposition, we were playing bad passes and trying too hard against a weaker opposition. One bad pass nearly ended up in the net, but for a Cresswell clearance off the line. And there’s the difference. Carroll replaced Emernike and Valencia was warming up to take Sakho’s place. Everyone knows my opinion on Valencia, but as a runner to keep their defence busy, and close out the game, fair enough.

Then it happened, Kouyate went in hard on Gayle, and picked up a straight red. Having seen the replays this morning, I think it was harsh. But anyway, the obvious thing to do with us still 2-1 up, is to bring on Obiang or Song for Sakho, adopt a more defensive stance and crack on with Carroll on his own up top, but no , Slaven still brings on Valencia, and we don’t fill the big hole in the middle.

Palace smell an equaliser and started to utilise the space and push on. And got their rewards with 15 to go when another defensive mistake  (Ogbonna) , let Gayle in to equalise.

WHU tried to rescue the 3 points, but to no avail.

In short, Slaven dropped the ball and has to take responsibility for this game.

Here’s another bit of controversy.  Payet. A fantastic player, and in the world’s best group of free kick takers this season. His vision is amazing and he is everyone’s darling. But his short passing is somewhat lacking and some of his tackling leaves a bit to be desired, and he does have to tackle in the positions he plays in. So I’ll just put this out there, Lanzini is a better player. He scores goals, ghosts past players, wins balls from players twice his size, and importantly links up better with the rest of the team, which also makes him more consistent. Payet will always get the headlines, and as long as Manuel stays under the radar, we will be OK.